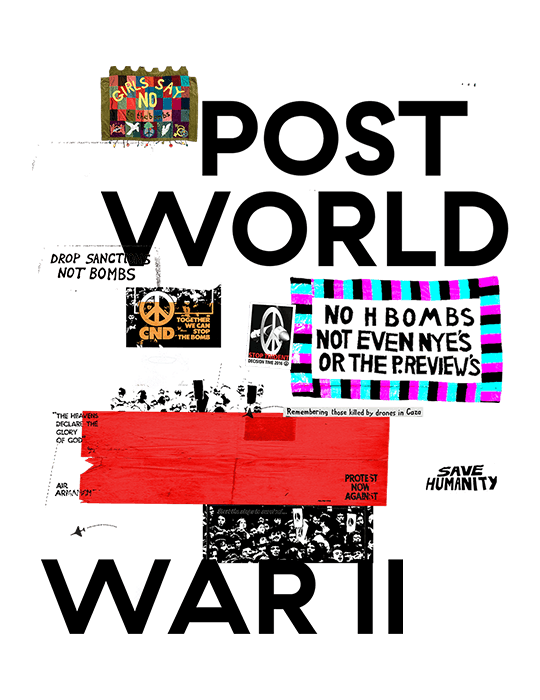 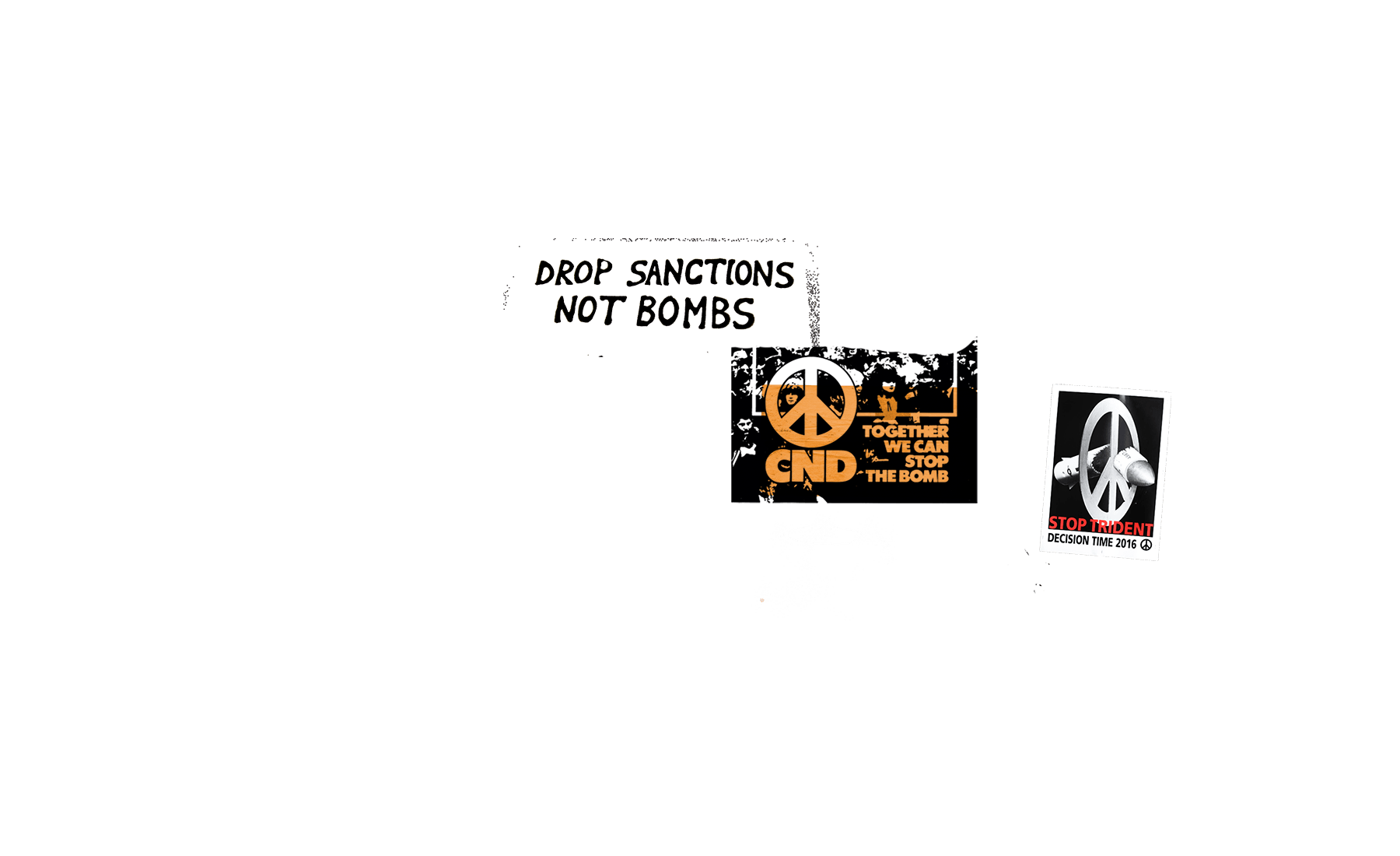 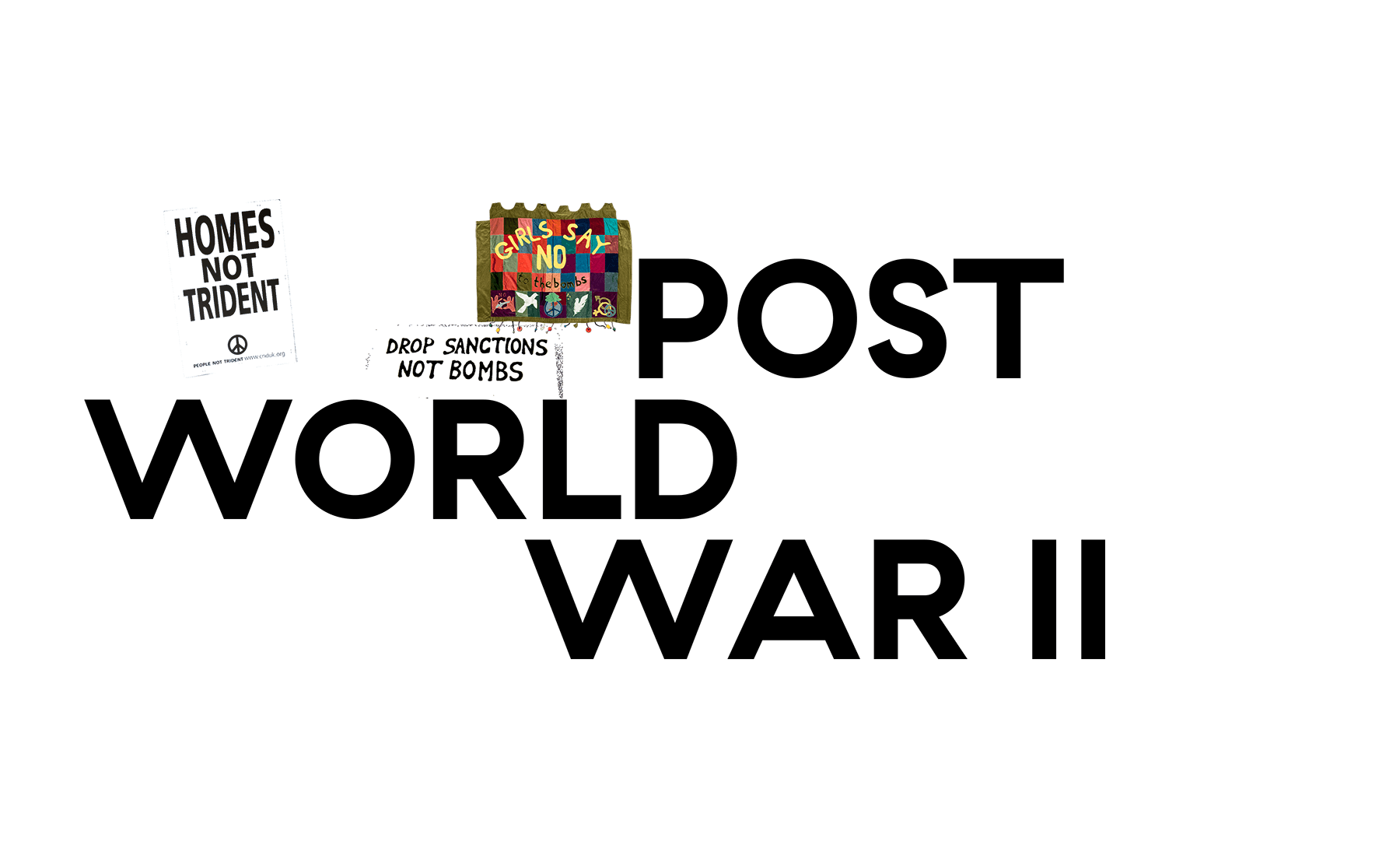 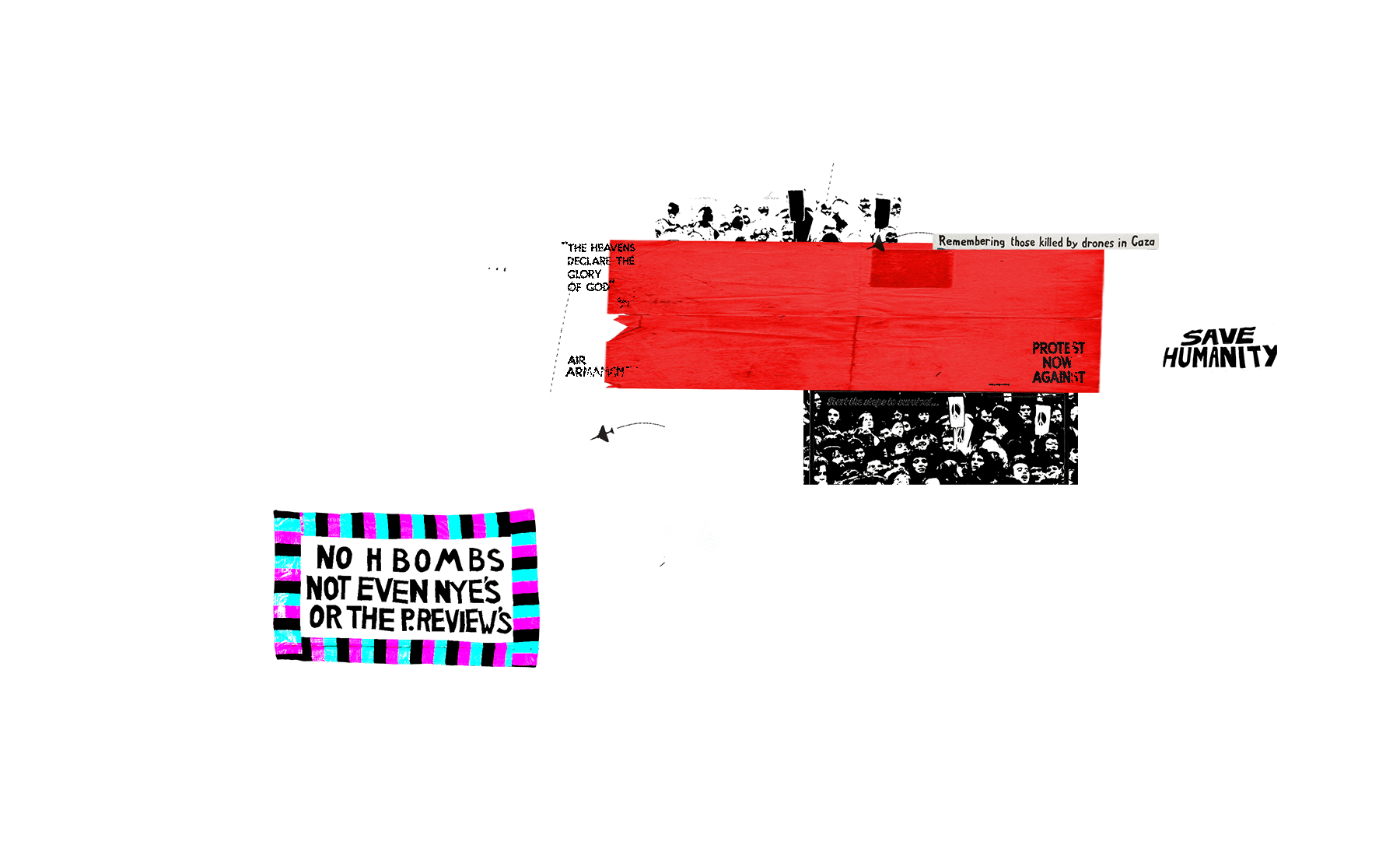 The Bombing War was over, but the advent of the nuclear weapons age and continued use of conventional bombs meant that the threat of aerial bombardment was still very real. This section will explore the growth of anti-nuclear campaigns and how aerial bombing remained a tactic of war.

The atomic bombing of Japan marked the beginning of the nuclear age. After WWII, the Cold War, a period of tensions between the two new superpowers of the USA and the Soviet Union, brought a nuclear arms race with countries rushing to stockpile their own weapons.

The Campaign for Nuclear Disarmament (CND) was founded in 1958 to non-violently campaign for Britain to get rid of its nuclear weapons. CND features heavily in the collection at The Peace Museum, telling the stories of those who have and continue to campaign for a nuclear free world. 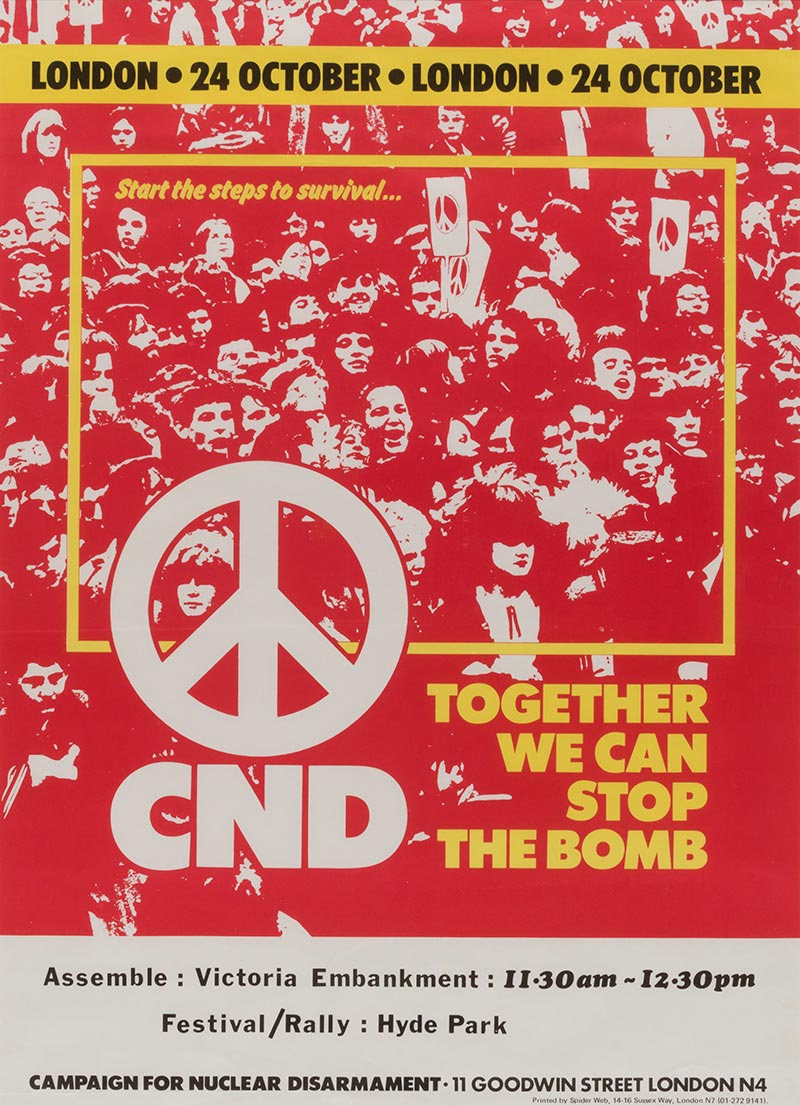 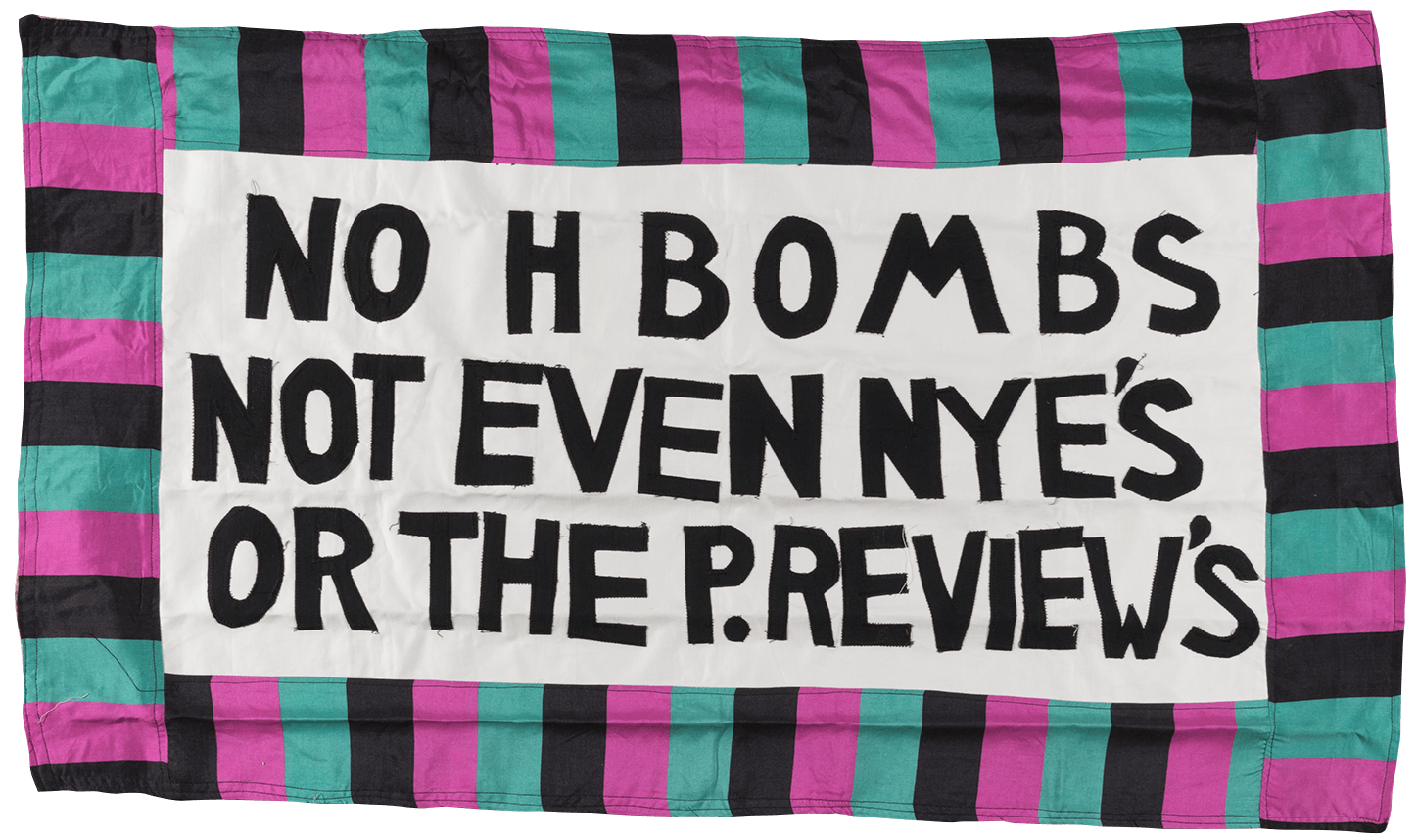 ‘No H Bombs Not Even Nye’s Or The P. Reviews’ Banner. Made when the Labour Party introduced their policy review in the late 1980s by Thalia Campbell.
Credit: Thalia Campbell Design 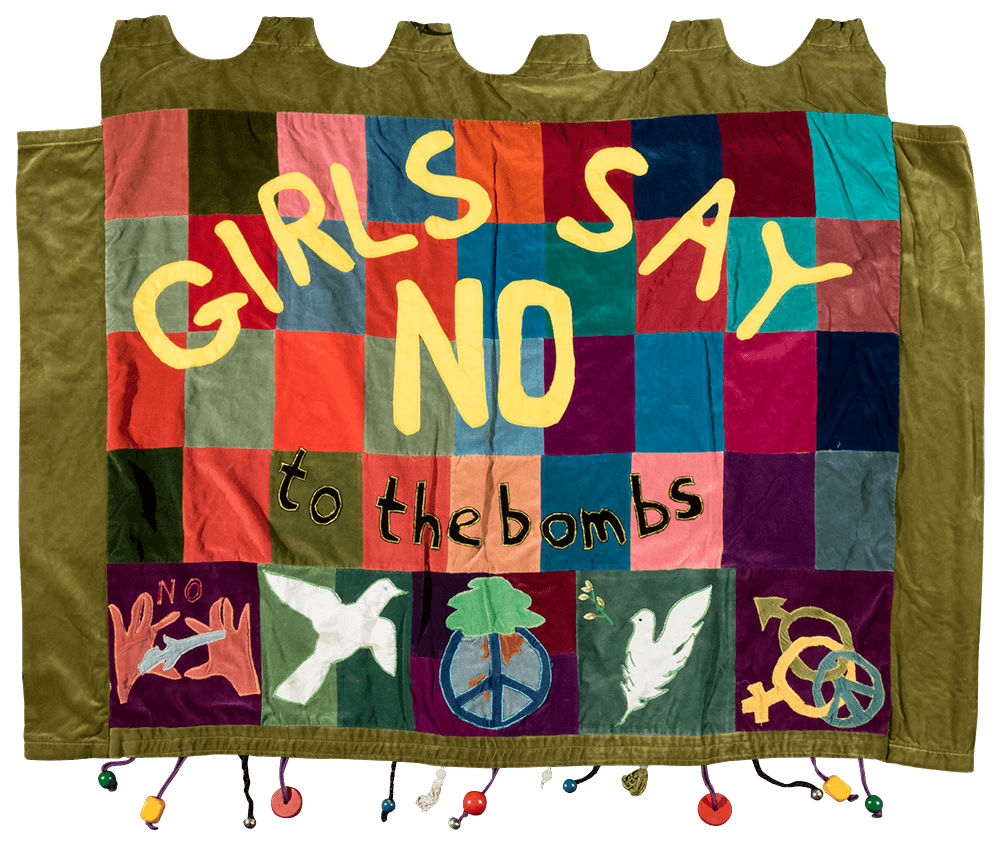 ‘Girls Say No’ banner created by Thalia Campbell in the early 1980s and displayed on the fence at Greenham Common Peace Camp. The banner received some flack because of the use of the word `girls’, which some women found demeaning, although it was referring to young girls.
Credit: Thalia Campbell Design

Many other campaigns formed over the years, including the Greenham Women’s Peace Camp at RAF Greenham Common in Berkshire.

In this video, created for our Peace and Pandemic exhibition, you can find out more about the many objects we have related to nuclear disarmament with our Curator Charlotte: 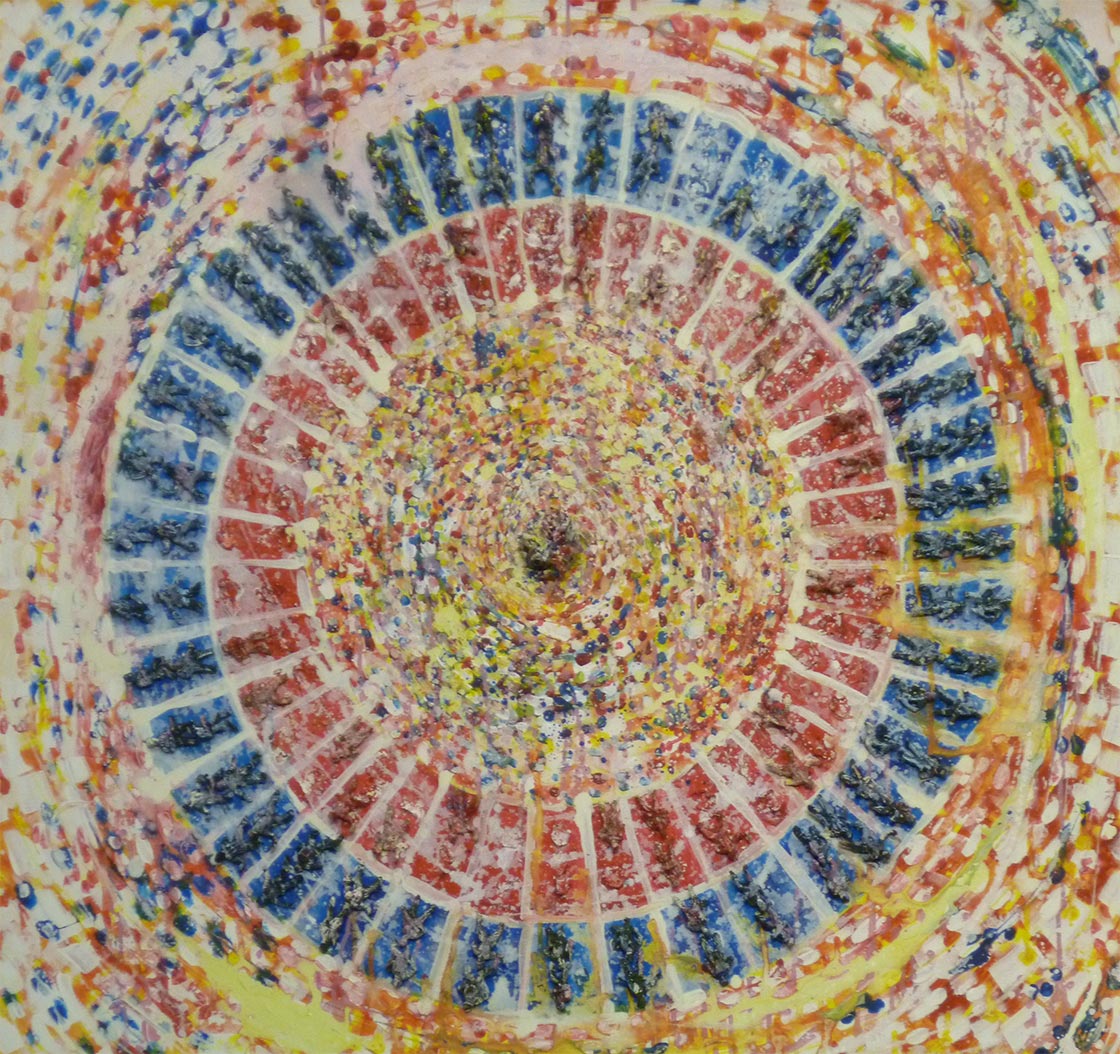 Disarmed is a painting that calls to end all wars. It shows the impact zone of a bomb and was inspired by the conflict in Syria. It was originally displayed at the Art the Arm Fair in 2019. They work with artists to expose the arms fair and hold a biennial art exhibition to coincide with the arms fair being held in London. It is due to return 14-17 September 2021.
Credit: Mayassah Alsader

The threat of nuclear war remained a constant, but the use of aerial bombardment remained a tactic of war after WWII.

Between 1950 and 1953, the Air Forces of the United Nations Command carried out bombing campaigns against North Korea. Thousands of civilians were killed. Almost every building in North Korea was destroyed as a result of conventional bombs, incendiary bombs and napalm being dropped in what US policy called precision bombing (only attacking legitimate targets). More bombs were dropped on Korea than the whole of the Pacfific in WWII.

From 1965 to 1968, the US Air Force bombed Vietnam in Operation Rolling Thunder. Initially, the capital city was not allowed to be bombed, but this policy changed in 1966. The lines of civilians and combatants remained blurred with thousands of deaths.

Cities in Lebanon, Israel and Palestine were all bombed throughout the long conflict in the region beginning in 1948 resulting in thousands of civilian casualties. Conflict remains to this day.

Between August 2nd 1990 until February 28th 1991 the RAF bombed Baghdad, Iraq. On 14th February 1991 a bomb intended to hit a bridge using a laser-guided missile instead hit a residential area instead killing 130 civilians.

NATO forces bombed Yugoslavia in 1999 in response to the Yugoslavian ethnic cleansing that took place in Kosovo. 500 civilians died as a result of the bombing campaign.

Chechnya was heavily bombed by Russia from 1994 to 2000 killing thousands of people including civilians. It’s estimated 27,000 people were killed during one siege in 1994. In 2003, the UN called Grozny the most destroyed city on Earth.

After the 2003 invasion of Iraq, the US led coalition began bombing campaigns. The official policy has always been that only legitimate targets (such as government buildings, insurgents and combatants) are bombed but there have been numerous reports of civilian casualties. All of these show that whilst we may remember WWII as the bombing war, it is still seen as a legitimate tactic of war, even when the lines between combatants and civilians becomes so blurred.

Whilst this exhibition provides a summary of some of the bombing campaigns that have taken place throughout history, the true impact can never be seen in short summaries and statistics.

‍Millions of people have lost their lives, their families and their homes as a result of aerial warfare.

The civil war in Syria is a stark reminder that aerial warfare is not a thing of the past. Aleppo was first bombed in July 2012 and since then the Syrian government has dropped tens of thousands of bombs on its own people across the cities of Syria. The citizens of Libya, who have also been in the midst of revolution and civil war, have also experienced extensive bombing.

Protests and Vigils are held to remember those who have lost their lives due to aerial warfare. This ‘Save Humanity’ banner was used in a vigil in Bradford on the 14th December 2016 for Syria, after the siege of Aleppo.
Credit: Samayya Afzal.

Drone warfare has become an increasingly used tactic of war. Drones are remotely piloted aircrafts. They were first used in the 1990s by the US as military surveillance drones. Advances in drone technology has now meant they are used for all kinds of purposes such as in photography and delivering medicine and supplies to remote areas. But as technology advances, so does military technology and drones have now become a key component of the military power of Britain, the US and Israel. They allow bombs to be dropped from thousands of miles away remotely, like a video game.

Drones became weaponised after 9/11 and have been used throughout the so-called “War on Terror”. Libya and Syria, as well as Iraq, Yemen and Somalia have also experienced drone attacks. Israel has used drone warfare in the ongoing conflict with Palestine in Gaza. Drone warfare is not specifically against any law, and the US have justified such use as part of the war on terror. There are no accurate figures on how many civilians have been killed by drone warfare but Reprieve, a human rights group, says that there is a high rate of errors and approximately 1147 people died as collateral damage. The UK government says only one civilian has been killed by British strikes, but there have been numerous press reports of civilians being killed as a result of US and UK drone warfare. 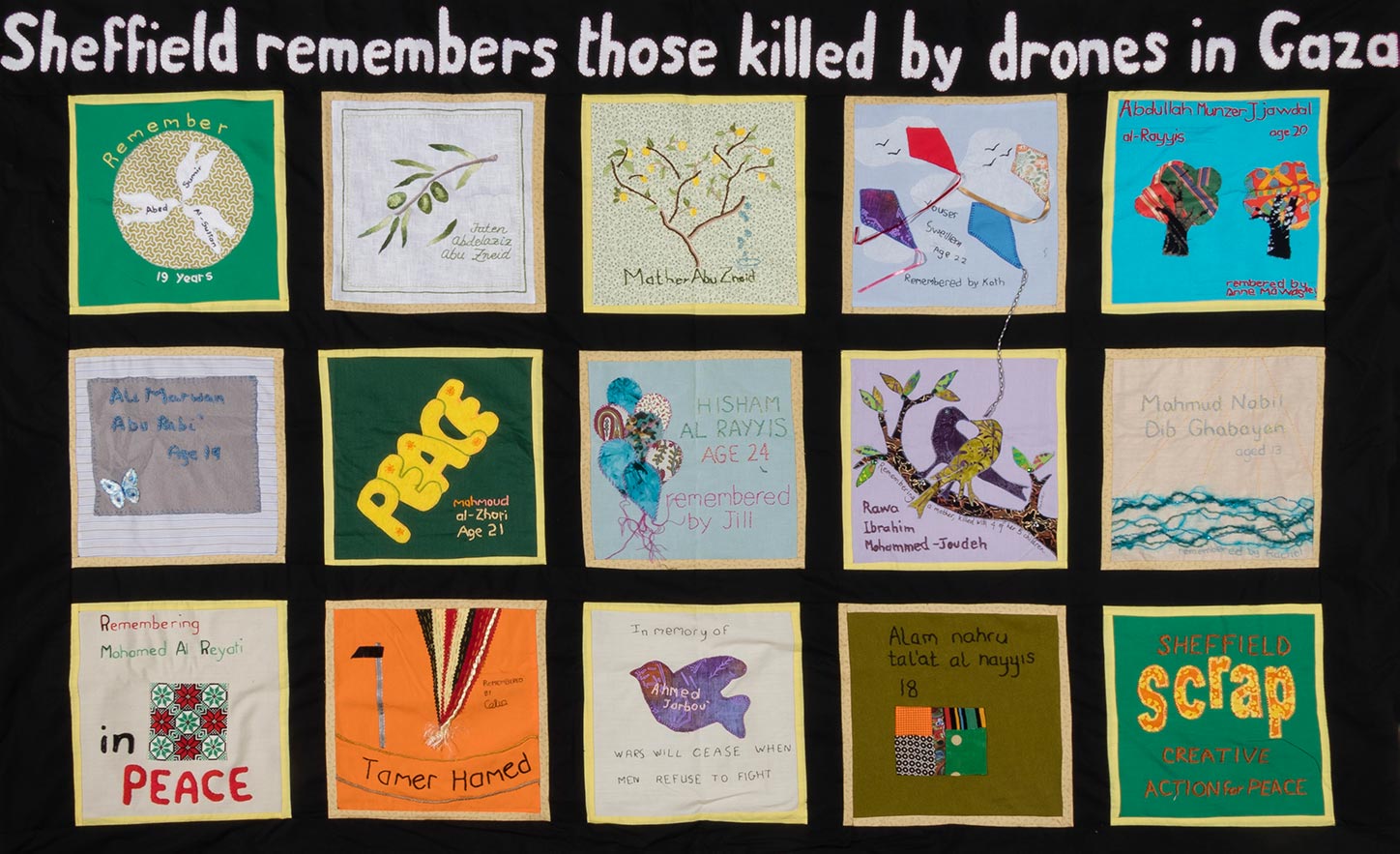 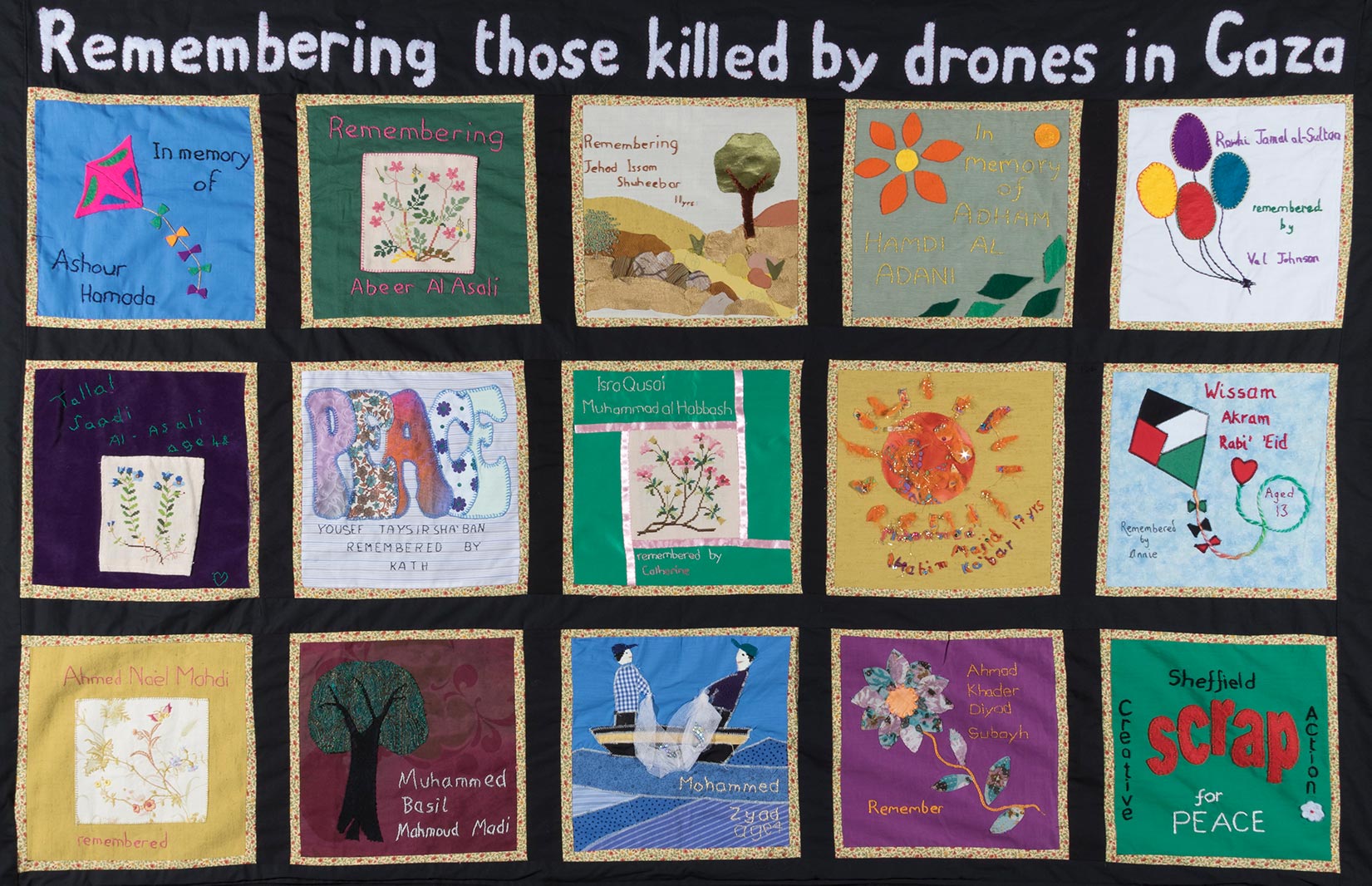 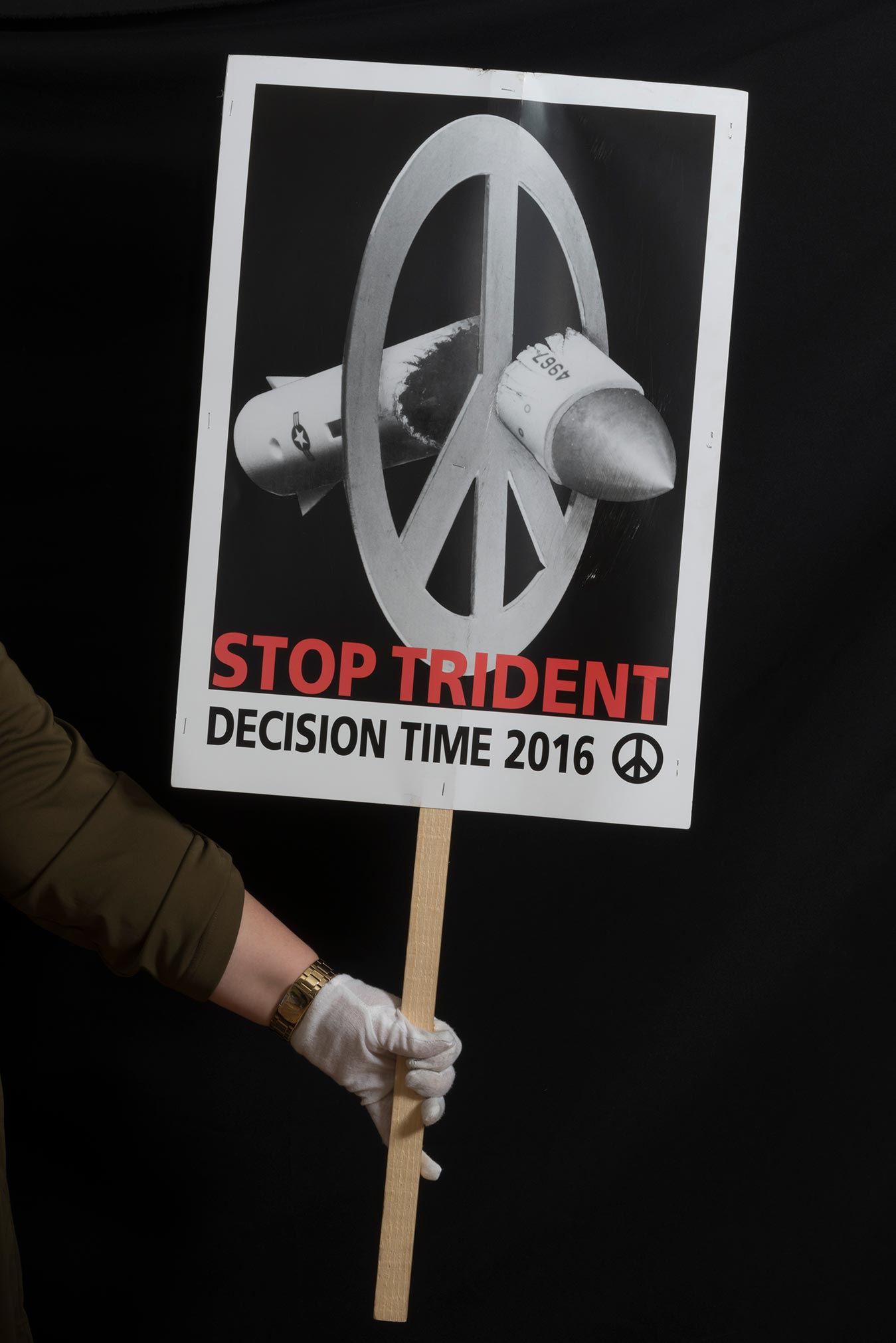 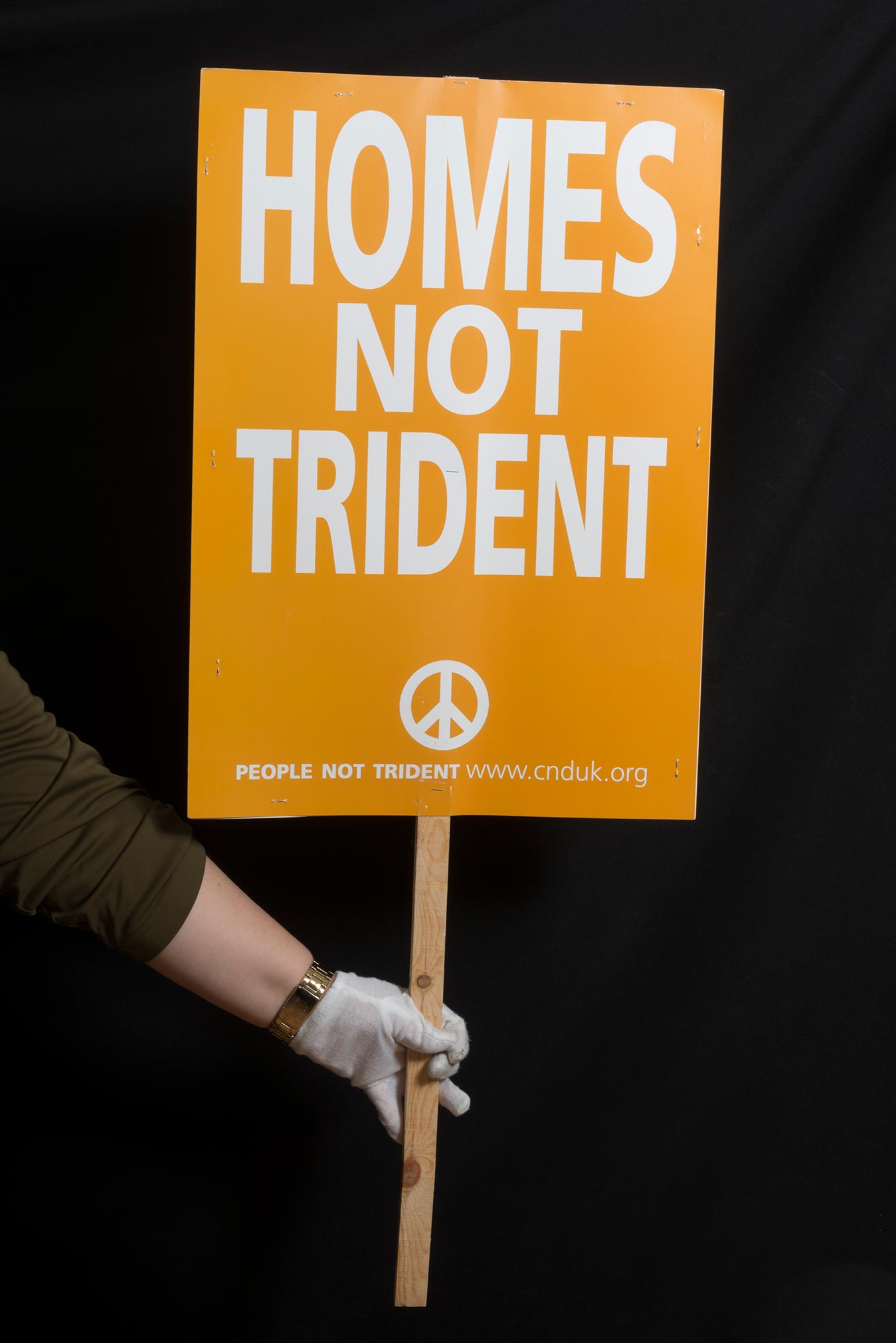 ‘Homes not Trident’ and ‘Stop Trident: Decision Time 2016’ are two CND placards made for and used at the Stop Trident demonstration that took place in London on Saturday 27th February 2016. This was the biggest anti-nuclear march seen in a generation.
Credit: Campaign for Nuclear Disarmament (CND)

As the threat of nuclear weapons and new forms of aerial bombardment remain a very real concern, campaign groups across the globe continue their work.

In 2013, protests took place at RAF Waddington, which had recently become Britain’s military drone base. CND, the Drone Campaign Network, Stop the War and War on Want all took part, warning that this showed an expansion in the national drones programme. Around the same time, the UK government announced plans to increase the number of Reaper drones from five to ten. These organisations and others all continue to campaign against drone warfare and its continued expansion.

The use of drones and the continued use of aerial bombardment also brings up questions around who supplies such weapons. Who supplied the bombs to the Syrian government to bomb its own people? Spotlight has been shone by numerous groups such as the Campaign Against the Arms Trade about where such weapons are coming from and how companies based in the UK and the US are involved.

You can find out more about this on our website from an exhibition held at The Peace Museum, The Etiquette of the Arms Trade:

The Etiquette of the Arms Tradeopen_in_new

On the 7th July 2017 in the General Assembly of the United Nations, The Treaty on the Prohibition of Nuclear Weapons was passed. It is the first legally binding international agreement to comprehensively ban nuclear weapons. However, 69 nations did not vote. Included in this 69 nations were all nations with nuclear weapons and all NATO members (except the Netherlands who voted against).

Despite this, it officially entered international law on 22nd January 2021. This means that for the nations who are party to it, they can not develop, test, produce, stockpile, station, transfer, use, or threaten to use nuclear weapons. States who already have nuclear weapons must agree to dispose of them in a set time period.

For anti-nuclear campaigners around the world, the 22nd January marked a huge moment in the steps towards a nuclear weapon free world. Many groups locally, nationally and internationally celebrated, but also used it as a call to the countries who did not sign, including the UK, to rethink their decision.

As part of The Peace Museum’s Peace and Pandemic digital exhibition, we collected these stories, you can view them here:

Despite this global nuclear ban, the UK government announced in early 2021 that Britain’s stockpile of nuclear weapons will be increased by over 40% as a cap that limits the number will be lifted. This decision has been met with opposition from politicians, from Scotland where the nuclear stockpile is kept, and from peace groups such as CND across the country and globally. It is a reminder that 76 years on from Hiroshima and Nagasaki, nuclear weapons are still being produced and whilst governments argue they are merely a deterrent and would never be used, the threat still remains real.